I know. Lots of people have said variations on the below. Doesn't change reality any more than deciding the Ocean isn't salty because you've read it everywhere. Cheers!

My father had the bug - full darkroom, prints, etc. But today, we've got, I don't know, probably trillions of photos out there. Most of them are pointless, except to the person who took them, the marketing departments using algorithms to digest them, and maybe the friends who were there.


They also only exist inside computer programs.

If you were already taking them, do you have your digital pictures from ten years ago? I've got an HP912 digital from 1999 or 2000. The pictures the original owner took are long since gone - around 4100 of them by the camera's count when I got it. I know that person, and they take some nice shots. Their photos got lost in hardware failures, equipment moves, business changes, etc. Time is not a friend to digital anything. Preserving digital memories requires care and consistency.

It's a lot better (or worse) today with cloud storage. So much so that by sheer dumb luck I've got digital photos from 2004. But, just like losing a box of negatives, it's not hard to lose digital files. Likely in 500 years, historians will look back and wonder what we were doing. They'll be wondering because there won't be anything left - hard drives, USB keys, and data centres changed or corrupted.


35mm film stopped that and gave me a reason to think. For one thing, I can't take 500 shots in a day out. With 35mm x 36 exposures, I'd have to carry 14 rolls of film. More if you throw some 24s into the bag. Even if they only cost me $6 per roll, and they're all home-developed B&W, that's $84+ for a day. A day filled with mostly meaningless photos taken just because, "That looks interesting..."

Unless you've got deep pockets, film slows you down quickly.

Shoot a manual camera, and suddenly the all-digital user has another issue: exposure. What the heck is that, anyway? Digital makes it simple, phones exponentially more so. But film...now you need to realize how much light will physically make a photo on your film! You...you...I can hardly say it. You have to think.


I've happily shot thousands of photos on phones, some actually incredible. There's nothing wrong with that. But, there is this one thing. It should be a psychological law, if not already written. For now I'll call it Jason's Law:

"The more tech - the less thought required. Not having to think becomes lack of knowledge. And the less we know, the more tech we require."

See where that's going? I work in IT, and I watch this happening daily to those around me. And not just computers, games, and phones - even cars and homes. And the cool part is, everyone makes huge assumptions about the future all the time. Just like everyone else in all of history. Yes, it will last forever.


So, film. Not movies - film. That tangible thing you hold in your hand which can burn in a fire but won't disappear with the accidental push of keys or malfunction of a USB key. What about it? For my part, I'm looking at projects documenting change. Whether that's shots of a family or something deteriorating or changing regularly, I'm doing my tiny, perhaps-insignificant part to provide a medium which will last for 100, 200, maybe even 500 years. It doesn't really matter, in the grand scheme. More importantly, I want people to have memories. 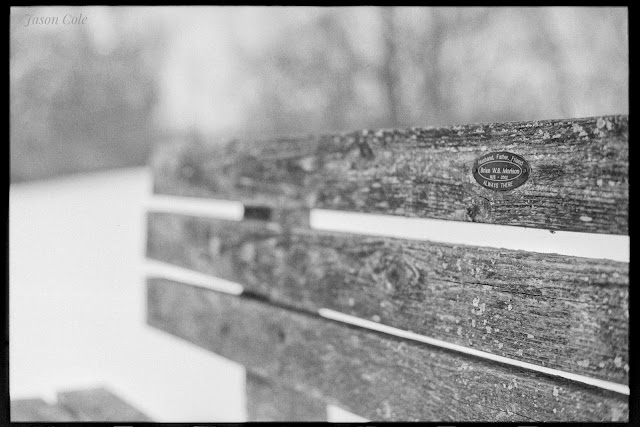